I’m not really into too many tinned foods, however, during our beach holiday in Sorrento I did find myself surfing the supermarket canned goods aisles for ‘best buys’. The irony of being so close to the sea yet shopping in the supermarket for seafood, which is likely to have come from halfway across the world, wasn’t lost on me.

I have been avoiding tuna for some time given it is overfished. Canned tuna is the biggest selling seafood item in Australia. Most of Australia’s tuna comes from the Pacific Ocean, which is also the source of over half the world’s tuna. But global tuna stocks have been decreasing since industrial fishing began in the 1950s. Greenpeace has recently released their Canned Tuna Guide which is about putting pressure on supermarkets and consumers to take responsibility for tuna stocks which are in a critical condition. Greenpeace is encouraging supermarkets to switch to sustainably caught Skipjack Tuna instead of Overfished species such as Bigeye and Yellowfin Tuna.

At home, instead of tuna, I’ve been enjoying a regular lunch of calamari salad (my version of Caesar salad). Calamari or squid, from our local Footscray fish market, is one of the ‘better choices’ in Australian Marine Conservation Society freshly updated seafood guide.

However, being on holidays, I was seeking another good choice which I believe are sardines or pilchards. Sardines are a nutritional powerhouse – they are loaded with calcium, magnesium, iron, phosphorous, potassium, zinc, copper, manganese, and are a great source of nonmeat vitamin B12. But they’re also quite low on the food chain so pretty efficient in terms of resources (compared to larger fishes that eat them). They are a short-lived, robust species (not currently overfished) and often caught with mid water trawl and purse seine a fishing method where bycatch is not a problem.

So all sounds good, eh? But what were the options, and how did they stack up according to what’s on the label? 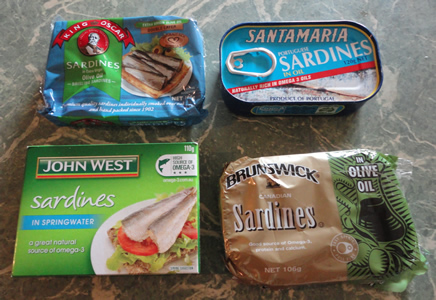 The reality is that finding a ‘best buy’ most of the time means weighing up different information and often making a trade-off of one for the other. The three main issues that I could ascertain from the information on the label that could help me decide on what was a better choice with regard to sardine options were:

* It’s worth noting that in regards to manufacture, as Greenpeace said in their submission to the recent labeling review, present country of origin information on seafood products is far from accurate. Instead of broad ‘country’ zones, they recommend labeling that includes the specifics of the FOA catch area (eg) as well as the specific name of the species in the product.

Options in Coles were :

Found some other options later on in SIMS, our local independent supermarket in Footscray:

For me the best buy amongst these was Santa Maria, which did come from Portugal but was imported by Conga Foods (based in Coburg – a family owned company employing 100 people in 2004) the most local company amongst those on offer. It was also packaged in just a steel can. In terms of the things I value most, packaging waste is probably the one that rates most highly, so I’d definitely be avoidng those with plastic wrap, and going for minimal layers of packaging. It topped the others for taste too.

So, back to paddling in rock pools with my kids…