Reflections on the real September 11 – 10 Years on

10 years ago, at the September 11 2000 protests at the Crown Casino, Nick and Clint were both inspired by a T-shirt that changed the way they thought about their voice in the world. Here are some reflections on the event, the changing world since then and learnings of the past decade.

The Revolution is just a ‘fairtrade’ T-shirt away

It is coming up to the 10 year anniversary of “S11” – not the S11 (two planes – New York’s twin towers) but the September 11 of the year 2000, 12 months before. It was the meeting of the World Economic Forum (WEF), at Melbourne’s crown casino.  The event made especially memorable by the 15,000 uninvited guests who, in the spirit of the previous year’s Seattle protests, gathered to blockade, parade and generally voice their concerns outside and around the venue.

I was there and, like many, found myself as much a voyeur as a participant, swept up in the event yet aware that there were many different agendas of those present. Slogans included the defiant “Shut down the WEF”, “End Captialism”, and the slightly more moderate “Global Justice not Corporate Greed”, “People not Profit”. I can understand why the mainstream media described it as “a mass of disconnection“ with voices for revolution, reform, increased transparency and improved dialogue. However what did unite us was a shared discontent with the present system, a realisation that global capitalism was not a solution for many of the world’s people or the world itself. Most of all, there was a desire to see those who had power take responsibility and enact some kind of change.

It was on the third day, during the celebration parade through the city centre, that I glimpsed a scraggy T-shirt with the hand written words scrawled ‘your dollar is you vote, who did you vote for today?‘. A simple slogan that, in a way, gave answer to a question that had been running through my mind – “in amongst these many voices, how is my voice heard in the world?” It was the realisation that each of us endorse various companies, activities and systems that go on behind the scenes using the money that we spend everyday.

So I began a personal pilgrimage to find out where my money was going which involved many years wandering the wilderness of the supermarket aisles reading labels and joining dots in the ‘who owns who’ mission of discovery. It was in 2004 that I met up with Clint who had been inspired by the very same T-shirt and began his own very similar compulsive ‘need to know’ project. (See Clint and Pradeepa with the Big hair in pic below). So came the genesis of what has become the Ethical Consumer Group.

Local community initatives such as Permabltiz, Cultivating Community, Transition Towns and Food Connect have sprung up in response to the need to localise our ‘seemingly’ global world. We’ve seen some big wins in campaigns using consumer power, such Kimberly Clarke’s commitment to no longer use pulp from endangered forests after a 6 year Greenpeace campaign, and Nestle responding to pressure to source more ‘sustainable’ palm oil. Who would have thought that the Melbourne Zoo would be advocating for adequate labelling of palm oil. Their “Don’t Palm us off” campaign, saw 130,000 signatures, and five major food manufacturers making commitments to switch to certified palm oil. And, huge steps towards greater corporate transparency such as Walmart, the world’s biggest retailer, introducing their ‘Sustainability Index‘ supplier questionnaire to their 100,000+ suppliers.

We’ve also seen other small organisations working tirelessly with minimal funds and resources to raise awareness about issues that effect each of us. Gene Ethics is raising awareness about the concerns of Genetic Engineering in our food and agriculture. (Over 93% of US soybean and 86% of US corn is now genetically modified).

In reality change is slow. We all walk one step at a time. All change takes time. It’s good to remember that what we imagine today may be a tangible reality tomorrow if we are committed to it and determined to act where we can. I am reminded of William Wilberforce who worked to see the abolishion of slavery in the British Empire, something that we today take for granted. It took him twenty-six years before success with the Slavery Abolition Act of 1833.

When Billy Bragg stated that “the revolution is just a T-shirt away” we never really took him all that seriously. But as our own story suggests, you never can tell what small yet significant moments may be the catalyst for something bigger.

At the S11 protests 10 years ago, I was full of anger. Anger at the banks and the corporations for exploiting people and the planet for profits and power. Anger at the general public for being so ignorant. Anger at myself for doing nothing about it. Over the years that anger has changed into fascination – fascination with why today’s society is the way it is, how we got here, and where we are going.

The media coverage of S11 was wildly different from my experience. The media told of 2,000 violent ill-informed radicals but I felt solidarity amongst those 10,000 protestors, a common yearning for a just world, our voices struggling to be heard. We were angry at those men in Crown Casino plotting to tighten their financial stranglehold. It was the first time I was at an event which was covered in the mainstream media. I got to see first hand the way the media twists events to push their own agendas. I haven’t watched the news the same way since. 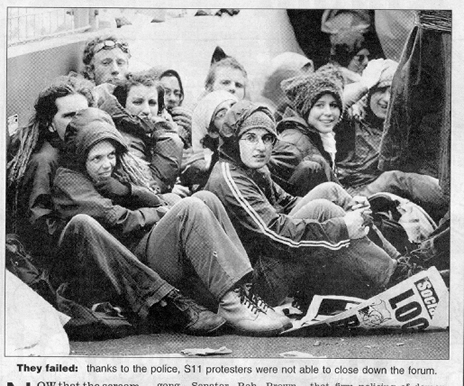 During the protests I saw a woman in a hand-written T-shirt which read, “Your Dollar is Your Vote – who did you vote for today?”. That planted a seed for me. Two years later I began working on “The Guide To Ethical Spending”. Two years after that I met Nick Ray, who was doing pretty much the same thing as me. We combined projects and we’ve been working together ever since.

I took on this project not because I wanted to do it, but because I saw it needed to be done. Australia needed a guide like this. Today I’m grateful to be in a position where my research is useful to others. I love putting all the pieces together. Who owns what, and what do they do.
I’m just a guy who found his purpose. To the woman wearing that t-shirt, wherever you are, your voice was heard that day. Thank you.

For a few days in September 2000, the space around the Crown Casino became a magical space where anything was possible. It was what Hakim Bey calls a temporary autonomous zone — where strangers were friends, and the world was on the verge of change. People in suits joined arms with people wearing tutus and mohawks. We were there to stop the world’s richest people meeting and deciding our future for us. All over the walls was graffiti, some echoing the Paris protests of 1968 (Down with a world where the guarantee you won’t die of starvation has been purchased with the guarantee that you will die of BOREDOM), some more modern (The more you consume the less you live) and some creative and resistive (I can’t afford to buy off the media, so I bought paint).

As the days went by, though, some of the patina wore off. One morning, the police on horses rode straight through a line of us, seated on the ground, peacefully blockading the entry to the conference. Police took their name badges off before they attacked. I was there partially as a journalist and police smashed one of our photographer’s cameras even when we were yelling “Press! Media!”. And that resulted in new graffiti: Thank you copper for punching – you just strengthened my resolve.