Introduction
Labour exploitation occurs at both the extraction and manufacturing stages of the production of electronic goods.

Child and forced labour is known to occur in the extraction of minerals for electronic goods. Artisanal and small-scale mining (ASM) refers to mining conducted with low-tech machinery and physical labour. Between 20-30 million people, mostly in developing nations, are estimated to be employed in the ASM sector and around 100 million people depend on ASM mining for their livelihoods.

ASM workers are usually impoverished and ineligible to receive formal loans, leaving them highly susceptible to being taken advantage of by loan sharks. They are then forced to provide free labour as repayment. This is known as ‘debt bondage’, a form of modern day slavery which over 35 million people are thought to be subject to. Not only does ASM mining expose children to dangerous conditions, but it also prevents them from attending school and breeds a cycle of poverty.

Independent reports have consistently recorded poor working conditions in electronics manufacturers. In 2012 a report that inspected ten Apple suppliers in China found the average overtime of employees was between 100-130 hours per month, and up to 150-180 hours during peak production season – well in excess of the maximum 36 hours allowed under Chinese law. 11-hour days with very few days off are also common.

Workers are often exposed to hazards such as toxic chemicals and metal dust, and only 31% of electronics companies recognise the right of employees in developing nations to participate in collective bargaining. Employees are also rarely paid above the legal minimum wage, around US$200 a month, and some companies do not pay for social insurance and work injury insurance as required by law.

Case Study
While labour exploitation is endemic throughout the manufacturing of electronics, the most well-known example in recent times is Taiwanese company Foxconn. The world’s largest electronics manufacturer with over one million employees, Foxconn made world headlines in 2010 following a spate of fourteen suicides at its factories.

The manufacturer, which assembles products for companies such as Apple, HP and Sony, is reported to have forced its employees to work six 12-hour days a week, restricted toilet breaks and enforced a hostile working environment. In response to the scandal Foxconn undertook measures to improve conditions, which included doubling wages and increasing the number of breaks allocated to each worker. It is also currently aiming to reduce its employees’ weekly hours to within China’s legal limits.

Key Standards and Certifications
The Fairmine Standard is awarded to ASM mining companies that extract gold and silver and meet certain standards on working conditions, health and safety and transparency.

The EICC (Electronic Industry Citizenship Coalition) Code of Conduct is a set of standards on social, environmental and ethical issues in the electronics industry supply chain, based on international norms and standards such as the Universal Declaration of Human Rights, ILO International Labor Standards.

Opportunities for Action
Choose to support those companies that have good records on recognising workers rights and avoid products from those that do not:

Identify which companies have produced your electronic goods and express your desire for them to improve factory conditions and the treatment of employees. 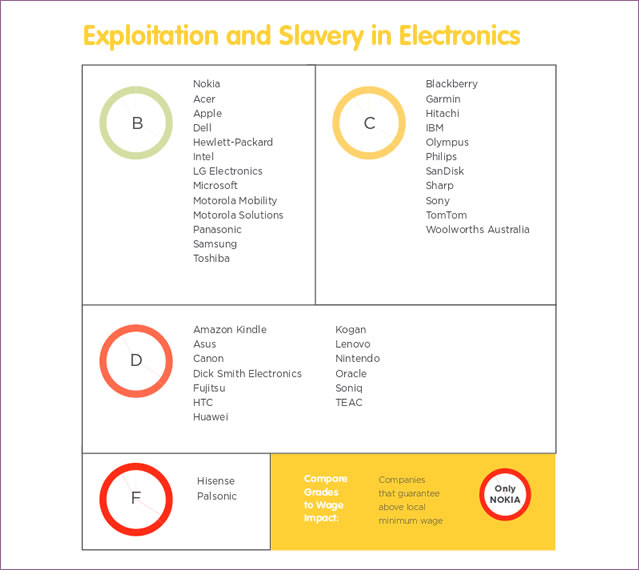 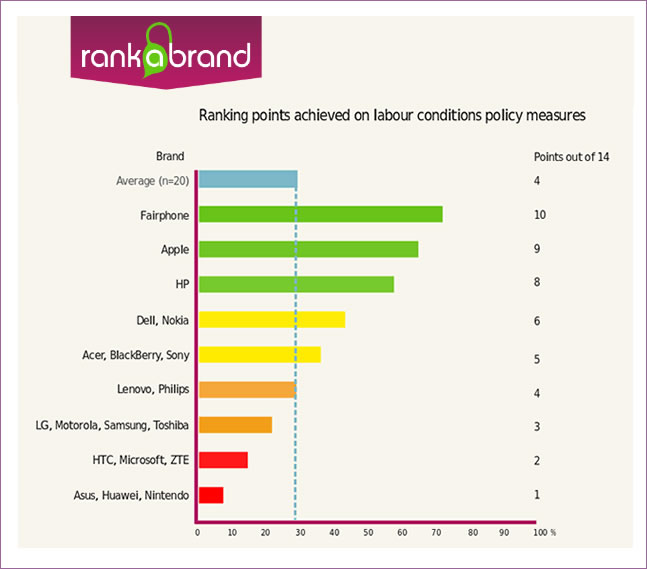