Since this initial post in June 2016, ABC’s Four Corners have screened ‘Milked Dry‘ (15/08/2016), which investigates the mismanagement in the dairy industry where ‘it’s costing farmers more to make the milk than they can get for selling it’. Also Murray Goulburn and its eleven directors has been named in a shareholder class action lodg

ed in the Supreme Court in May 2016 which claims Murray Goulburn knowingly made misleading statements about forecast profits and production as it embarked on its $500 million pre float raising. Former Murray Goulburn boss Gary Helou has been criticised for receiving an excessive payout when leaving the company – he pocketed $10 million as farmers struggle to break even after reduced farm-gate prices for milk.  See our Shop Ethical! Murray Goulburn profile here.

In the light of Murray Goulburn and Fonterra announcing the decrease in milk prices paid to farmers (in April/May 2016), there’s been a public outcry in support of dairy farmers. We at Shop Ethical! added a criticism to their profile (giving them an overall ‘C’ rating) but spent some time debating what the appropriate weight for this criticism should be. (It’s not as if they’re intentionally ‘deforesting the Amazon’, but rather managing themselves out of a bad situation in a less-than-ideal way).

Many people of course are asking what is the best course of action, if we as consumers want to make the most ethical milk choices. Do we boycott the company? What will actually lead to the best outcome for the dairy farmers affected?

Like most questions of ethics, the way forward depends on your point of view. Here are some thoughts from us at Shop Ethical!  –  just some ideas that may act as a guide.

The reason Murray Goulburn is not paying farmers a fair price, is because of a drop in demand. This is largely due to a drop in exports, but is affected by sales in the domestic market. So supporting them will help this. Paying for their regular product, instead of the supermarket homebrand (which they supply in Coles) is a step in supporting these farmers. We actually don’t know specifically what farmers are being paid. We do know however that supermarket homebrands mean less money in generally and a greater percentage to the supermarket, so quite a lot less to the producer (See this 4 Corners from 2008 for some insight into homebrand products). Murray Goulburn is now the only one of the big producers that is still Australian owned, so supporting them is a good move.

There’s been some interest in mainstream media for supporting farmers in this way. See Go the #milkmo: Aussies back Sunday Herald Sun campaign for our dairy farmers (May 21 2016).

However, if you’re wanting to support farmers more directly, and want to make sure the farmers you’re supporting are getting a more fair price (without middle-men), then supporting independent, smaller, family-owned dairies is much, much better. One way you can do this is to find milk available in your state on Flavour Crusader’s Alt Milk page then follow the links to the product/farm website to find where they retail. Some of these Australian-owned smaller producers are listed on our milk page and receive a ‘B’ or ‘A’ too. This option of course doesn’t help the farmers who supply Murray Goulburn, but does mean you’re supporting local farmers more directly

For the most amazing list of organic, family-owned or independent dairies, see the wonderful blog site – FlavourCrusader.com . If you’re a dairy drinker, here’s where to get it! … Big thanks to Sharon for this great work!. 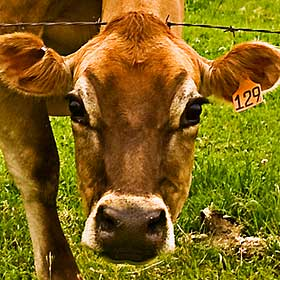 As the major supermarkets fight wars over the price of milk, other players step out of the ring and compete with quality. Small dairies still pasteurise to meet health regulations, yet many supply milk non-homogenised; the milk retains its creamy texture and an old-fashioned layer of cream rises to the top.

Most also do not add non-milk additives, permeates or stabilisers. So they sell… just milk.  Revolutionary!

Here’s a list of organic, family-owned or independent dairies; the milk is stocked in markets and shops near you.   … more

Yes, you choose who you vote for!

Another good option – Aussie Farmers Direct. Delivered direct to your door. This is their promotional video from 2012. Here’s what they say about their commitment to fair prices for producers.

…While most dairy brands and dairy product manufacturing is corporate-owned, the vast majority of the 6,400 dairy farms in Australia are family owned and operated, supplying raw milk to one of the industry’s milk processors or dairy product manufacturers either directly or through a cooperative. Only about 2% of Australian dairy farms are corporate owned. The average herd size is 260 cows. …

…Roughly 2600 dairy farms supply Murray Goulburn and 1200 supply Fonterra – about 60% of all dairy farmers in total. Between 6-10% of milk supplied to Murray Goulburn and Fonterra goes into domestic fresh milk (both supermarket private label and branded milks – and products like butter and cheese). The rest is exported, mainly in the form of commodity products like milk powder and cheese. …

Since writing this (above) I have come across the ABC Checkout’s episode ‘Milking It’ from 2013, which does explain the complexities of who gets paid what. And reminds us to skip both the supermarkets and the processors where possible!